Previous Post
I Married My Cousin: Endogamy in Egypt, Between Tradition and Genetic Concerns
Next Post
Israeli MP Dr. Anat Berko: Palestine Cannot Exist Because Arabs Do Not Have the Letter P

Seif Bibars sits down with Jazzy songstress Noha Fekry, who will be taking center stage at Nileside spot Beetroot every Friday afternoon for Soul & Sangria, to talk the music scene in Egypt, the virtue of small venues, and pouring your soul into a performance... 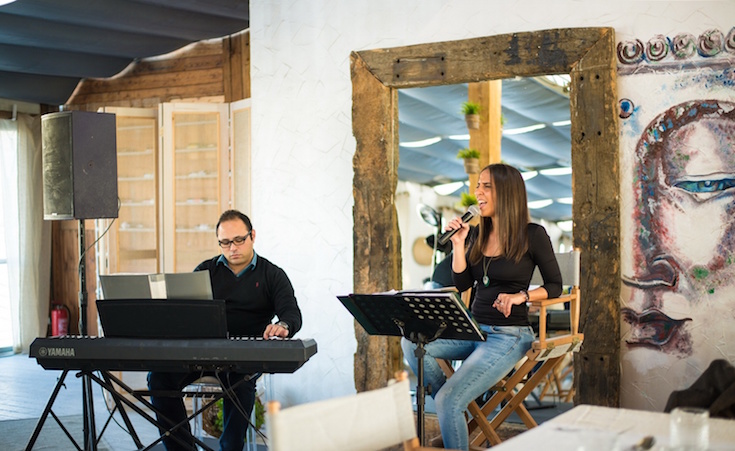 Noha Fekry is one of, if not the best female vocalist in Egypt's Jazz scene; her music is so good, it takes a considerable amount of will power to stop playing it. The tingle that comes from hearing a great song is abundant and with Fekry's sound - warm and velvety, with a very familiar feeling that puts you at ease - as soon as your hear it you forget your worries. The songstress will be playing at Beetroot every Friday from 2:30 to 6:00 PM, a mellow afternoon gig that goes flawlessly with her sound.

Following her successful first gig at Beetroot with Rami Attala – it was so good they offered her a residency - I catch up with the songstress to talk Jazz, origins, and future plans.

So Noha, first of all tell me a bit about yourself; how did you get into music?

I’ve been singing ever since I can remember. Some singers caught my attention, and when I was in prep school I decided that this is what I wanted to do. I never thought I would pull it off. In high school, I got good grades and I chose a major that has nothing to do with music. In my second year of university, I joined the Cairo Celebration Choir at the Opera, with Maestro Nayer Nagui. After that, I met Sobhy Bidair, an opera singer with his own singing formation – Sobhy Bidair and Friends. I graduated in 2003 and took vocal courses with Sobhy. Fast forward one year; the first time I saw Riff Band, I contacted them and they took me on as a guest singer. In 2007, Derrel Kennedy composed an original song for me: Together. I performed it at Sawy and in 2008 I officially joined Riff Band as the lead female singer after four years of being a guest.

Are you now purely pursuing a career in music or do you do something else?

Until 2009 I had a job that I left to start a career in music; now, singing is my full time job. I teach a vocal training course, I call it Singing Essentials. I’ve been studying piano under Rashad Fahim; he’s a very important teacher and a Berkley graduate (Berkley is one of the biggest music schools in the world). Studying under his direction has been a thrill. In 2012 I started writing lyrics and recorded a couple of originals that are available on Soundcloud; the latest single El 3esh2 7ala was released last October, co-written by Bilal Farouk and composed by Ossama Saeed, arrangement by Janan (my new band). The band is made up of myself on vocals, Mokhtar El Sayeh on bass, Yousef El-Sioufy on guitar, and Maged Nagaty on drums. A few months before that, in May of 2015, I released a duo album with Rami Attala called A Conversation. Rami plays piano, and will be performing with me a lot at Beetroot.

For our readers who’ve never heard your music before, tell me a bit about what kind of music you play.

In a nutshell, nearly everything before Janan has been Jazz. Janan is on a different track, exploring different genres. Riff Band is mainly Jazz and Oldies – Broadway songs and things like that. Other things I explored would be Arabic songs that were taken and jazzed up. Like how Ziad Rahbany took Autumn Leaves and changed it to Arabic lyrics and called it Betzakarak. So, either Arabic songs that were arranged into a jazzy envelope or Jazz songs that had Arabic lyrics added to them. Janan is different – no covers, only originals – it has nothing to do with Jazz. It’s world music. I can't put it under a genre really, it’s Fusion; a lot of different styles.

What do you think of the crowd for this type of music in Egypt?

The type of music I play draws in a different crowd than those drawn to commercial Arabic music, mahraganat, or other mainstream music. Their ears are still not accustomed to this type of music; however, sometimes we do find a crowd that is really into this kind of music. When we are able to engage the crowd and get them into this music, it becomes really rewarding. It's our job as artists to engage the crowd; we’re currently doing that by putting Arabic songs into our performances, and that makes people relate to it. The age group that comes to our gigs is really colourful, from teenagers to older age groups, especially in certain venues that are purely about music like 3elbet Alwan or Magnolia where people are there for the music not drinks or hanging out. People that don't like the music leave, and we’re surprised that teenagers and the younger crowds come and stay!

What’s your experience playing at different venues? Any favourite or least favourite places?

I like small venues more than bigger places; they have an intimate experience. The stage also has its own appeal, you’re not face-to-face with the crowd but, still, a unique energy exists. As an artist, I prefer the places where it’s set up for a show; stage gigs or cultural hubs where people are there only for the music, because we’re able to engage the crowds since their energy is completely focused on us. Nevertheless, when I'm at venues where people are there for socialising and drinking, it’s different. The interiors are usually better than the former, it’s really cosy. I personally love places like Beetroot, Jazz Bar, Saigon, and Mohamed Aly Club.

There are sometimes snags when performing of course. It’s my job to create the ambience, but when people ignore the band playing, and treat us like a jukebox, asking for requests, it makes it hard for us to perform our pieces. Also, there are times when people stand so close and and chat so loudly that their voices get picked up by the mic! Some venues mismanage their bookings; the people making the bookings sometimes book bands for their popularity disregarding the taste of their guests. You can’t book a band for a crowd that only appreciates Deep House, and or book artists like myself at a party night because it won't work. It depends on the genre of the band; you have to know your audience. Some bands can work for a party night, like Rock bands or bands that can play an entire set of songs that will make people dance.

Tell me about Beetroot; what was the main thing you liked about playing there, and what should people expect from your new residency at the place?

I appreciate the interior designs of the places I play; I like to have a nice visual while playing, and Beetroot is cosy and has a beautifully designed interior. I like the fact that it is a daytime gig and I love being next to the Nile. The team behind Beetroot are a really nice group of people, and I enjoy working with them; they appreciate the kind of art I'm offering.

Yes I do like Sangrias, and I do like Soul music. I would have preferred if it was called Jazz and Sangrias, since we don't play Soul music, but in another sense we do reveal our souls, Rami and I. We both pour our hearts and souls into the performances, and the crowd must also open up their souls in a sense for it to be a special performance. So, it works. Sangria and Soul has nothing to do with Soul music; it’s our own souls that are on the menu here with Sangrias to wash it down.